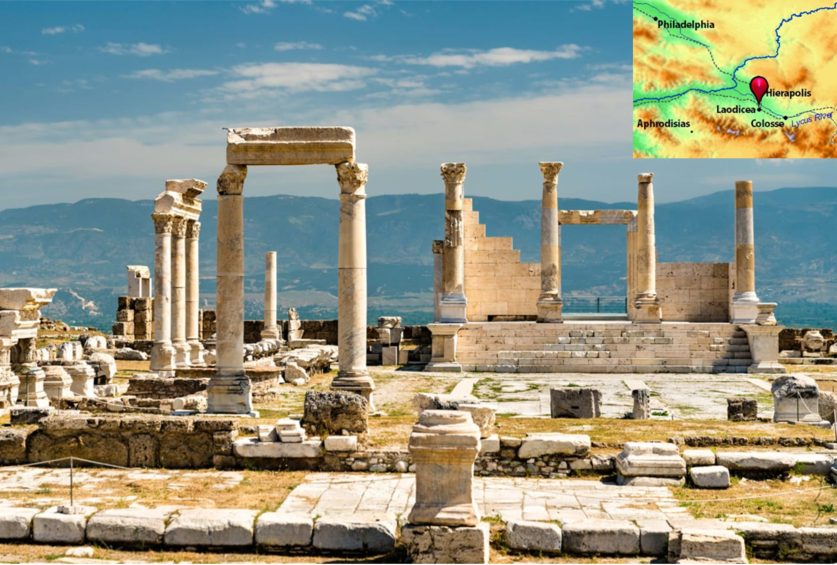 On a warm, clear afternoon in the summer of 2002, we stood among the few visible stones that remain of the ancient city of Laodicea. Randy was the professor and Brandon a student in a class earning biblical studies credit by walking for several weeks “In the Footsteps of Paul” through Turkey and Greece. While we were in the neighborhood, we also visited the cities that were home to the seven churches in the Revelation of John. Laodicea was one of these. Of that now-ruined city, the risen Lord had said, “I know your deeds, that you are neither cold nor hot. I wish you were either one or the other! So, because you are lukewarm—neither hot nor cold—I am about to spit you out of my mouth” (Rev 3:15–16).

I (Brandon) heard plenty of sermons on this short passage growing up. My religious leaders generally interpreted the words hot, cold and lukewarm as designations of spiritual commitment. Eugene Peterson calls this the “Laodicean spectrum of spirituality.” This interpretation suggests that Jesus wants us to be hot with spiritual zeal but that unfortunately many of us, like the Laodiceans, are lukewarm. We believe in Jesus, but we fail to take our faith seriously enough. This will not do, since Jesus would prefer that we were altogether cold—lost—than lukewarm in the faith. I never understood why this was the case, but since the meaning of the text seemed plain, I strove to keep the gospel fires burning.

In the summer of 2002, however, standing there among the then-unexcavated ruins of Laodicea, another interpretation of that famous passage presented itself. Several miles northwest of Laodicea, perched atop a small mountain, is a city called Hierapolis. At the base of Hierapolis is an extraordinary geological formation produced by the natural hot springs that surface around the city. Even today, the city is known for its steaming mineral baths. Over the centuries, the subterranean springs have created a snow-white calcium deposit known in Turkish as Pamukkale, or “cotton castle,” that cascades down the slopes like ice. From our vantage point in Laodicea, Hierapolis gleamed white like a freshly powdered ski slope.

About the same distance from Laodicea in the opposite direction is Colossae. The city was not yet excavated in 2002, so we couldn’t see it; but it is almost certain that in the first century, you could have seen Colossae from Laodicea. Paul’s colleague Epaphras worked in Colossae, as well as in Laodicea and Hierapolis (Col 4:13). It was a less notable city than Laodicea, but it had one thing Laodicea didn’t: a cold, freshwater spring. In fact, it was water—or the lack thereof—that set Laodicea apart. Unlike its neighbors, Laodicea had no springs at all. It had to import its water via aqueduct from elsewhere: hot mineral water from Hierapolis or fresh cold water from Colossae. The trouble was, by the time the water from either city made it to Laodicea, it had lost the qualities that made it remarkable. The hot water was no longer hot; the cold water was no longer cold. The Laodiceans were left with all the lukewarm water they could drink. Surely they wished their water was one or the other—either hot or cold. There isn’t much use for lukewarm water.

I suspect that the meaning of the Lord’s warning was clear to the Laodiceans. He wished his people were hot (like the salubrious waters of Hierapolis) or cold (like the refreshing waters of Colossae). Instead, their discipleship was unremarkable.

The point of this story is that where we stand influences how we read—and ultimately apply—the Bible. In the revivalist traditions of North American Christianity, the text reads as a warning against nominal Christian commitment. Eugene Peterson explains what this interpretation demanded of the religious leaders of his youth (and mine): “High on every pastor’s agenda was keeping people ‘on fire’ for Jesus. Worship in general and the sermon in particular were bellows for blowing the smoldering embers into a blaze.” “Hot” (committed) was best, but “cold” (lost) was preferable to “lukewarm” (nominal), because it was honest!

From the marble streets of Laodicea, hot and cold are equally acceptable. In both places and times, the meaning may seem plain, even though the interpretations are plainly different. In whatever place and whatever age people read the Bible, we instinctively draw from our own cultural context to make sense of what we’re reading.

Coming to terms with Our Cultural Blinders Should Christians Care for the Environment if God Will One Day Destroy it?