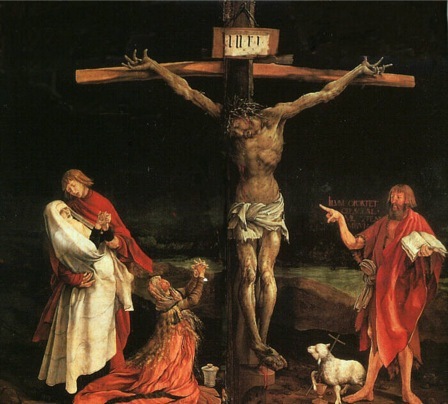 Did Jesus Really Have To Die?

As Christians throughout the world commemorate the crucifixion of a whipped-raw Jesus on Good Friday, and as they symbolically eat Christ’s body and drink his blood on Easter Sunday, one might well ask: What in God’s name is going on?

Rooms full of books have been written about this subject. But for now, in this small space, let’s focus on one distressing detail as a key to the rest and ask a simple, if unsettling, question: What’s all this blood about?

Christian blood-symbolism harks back to Israelite temple worship, in which animals were killed and offered to God as substitutes for the human sinners who gave them up. “Life for life” was the basic principle of atonement, of making up for what wrong had been done. And the spilling of blood is the most powerful of sign of life-sacrifice. The Hebrew prophets themselves made clear that these rituals together formed an elaborate picture of God’s holiness and our sin. God recognizes sin to be mortally serious. Therefore the most graphic symbolism of life and death was necessary to portray both the cost of sin and the price of its redemption. Indeed, this is a view shared in many other cultures: hence blood sacrifice, including human sacrifice, has been evident around the globe.

What is striking about the Israelite sacrificial system is not only its tribute to God’s holiness, but also its testimony to God’s mercy. God was willing to accept animal substitutes and forbade human sacrifice, although it makes no apparent sense to do so: How can the blood of bulls or sheep or goats possibly make up for human sin?

The Blood of Animals was not Enough

Christian belief recognizes this point and affirms the startling truth that human sacrifice was, in fact, necessary. Only human beings can pay human moral debts, and those debts amount to a weight sufficient to crush the life out of us. Jesus called himself the “Son of Man,” an ancient phrase that means “the representative of humanity,” and (in a way no one understands) took on himself the consequences of humanity’s sin. He underwent the suffering and death due to each and all of us as our scapegoat, as “the Lamb of God who takes away the sins of the world.”

So the blood-symbolism makes grim sense. “Life for life,” and in this Great Exchange, as Luther puts it, Christ receives the consequences of our sin while we receive the benefits of his goodness.

Some recent critics, and even some theologians, have been appalled at this whole idea, however. They see in this scenario a Christ who is a victim of God’s bloodthirsty rage. But remember that orthodox Christianity is trinitarian, believing in only one God who somehow exists as three Persons: Father, Son, and Holy Spirit. The Cross is not a Big Father-God angrily pounding a Smaller Son-God to death. It is the One God–Father, Son, and Spirit–who suffers in the Cross-event. Indeed, the one God suffers in three ways: as the one on the Cross, yes, but also as the loving Father and Spirit who hate to see him hurt, even as they support him in his necessary work. So there is no “divine child abuse,” as some put it, in this doctrine, but abundant suffering on God’s part so as to spare us what we deserve.

But why doesn’t God just forgive us?

Why does anyone have to suffer at all? The first thing to say is that forgiveness of any serious transgression means someone has to suffer. If you have forgiven a painful injury, you know how much it hurts to refuse to get even, let alone seek vengeance, and instead to forgive.

The second thing to say is that the Cross is more than just an elaborate, and shocking, symbol of God’s self-sacrificial forgiveness. The Cross actually takes care of something. It doesn’t just point to something else (such as God’s love or God’s justice): It accomplishes something.

Many of the world’s religions speak of wrong actions as affecting the order of things, not just making the gods (or other people or oneself) unhappy. In India, when one fails to do what one should, one’s negative actions create negative karma. In tribal societies around the world, breaking tabus–whether one meant to do so or not–creates a bad situation that requires corrective action. And in ancient Israel, failing to follow God’s law–even in unintentional transgression–was called sin, and required an appropriate sacrifice.

Christianity shares this sense that sin is not only a rupture in our relationship with God and others. Such a rupture could be met indeed with forgiveness. Sin also somehow makes a mess, incurs a debt, infects a soul, and so on in a range of metaphors that all point to a serious problem in universe that needs solving.

Five-year-old Billy uses his crayons to decorate Mom’s heirloom Irish linen tablecloth. He has been told not to do so, but he does it anyway. When Mom calls him to account, Billy sees how sad she is and repents. Mom forgives him. All is well–except that the tablecloth still needs washing. The relationship of Mom and Billy is restored by forgiveness. But someone still needs to take care of the damage caused by Billy’s sin.

I owe you a thousand dollars. It’s time to pay up, and I tell you that I need the money for something else. You compassionately see my side of things, and you decide to forgive the loan, and forgive me. We thus remain friends. But the fact remains that you are out a thousand dollars. Either I pay it, or you do–no matter how we feel about each other.

What Does Jesus’ Death Accomplish?

In the Cross of Christ there is a disorder that is rectified, a stain that is removed, a disease that is cured, a penalty that is paid, a something wrong that is made right by Jesus’ sacrifice of himself. The global intuition is that suffering makes up for, atones for, wrong actions. In the Garden of Gethsemane, the night before his death, Jesus acknowledges in his prayer to his Father that the “cup” of suffering must be drained by someone–either us or him. However we feel about him and however he feels about us, the wrong must still be righted. The cup is still there. And Jesus chooses to drink it on our behalf.

The Cross of Christ therefore shows us an impressive example of a hero’s commitment to a cause. It assures us of God’s love. It inspires devotion. And, indeed, it marks Christ’s victory over all of our enemies–particularly death, hell, and the devil. All of these, and more, are valid and important aspects of the Crucifixion.

The Cross of Christ also, however, did what needed to be done, however dimly we can understand it.

Let us look hard, then, with wonder, and horror, and gratitude, and see what we can see.

“Behold! The Lamb of God who takes away the sin of the world.”

Why Bread and Wine?