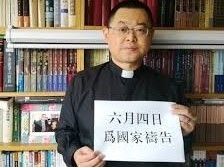 The Story: A persecuted Reformed pastor in China issued a letter explaining the meaning and necessity of faithful disobedience, how it is distinct from political activism or civil disobedience, and how Christians should carry it out.

The Background: Earlier this month Wang Yi; his wife, Jiang Rong; and more than 100 Christians who attend Early Rain Covenant Church were arrested in the city of Chengdu by Chinese authorities. The members of the congregation were charged with “inciting subversion of state power.” According to China Aid, this is a charge often handed to Chinese Christians because the Communist Party views religion as a threat to their ideological control. If convicted, Wang and his parishioners could face up to 15 years in prison. Some of the church leaders and members have since been released but remain under house arrest.

The Chinese government began a renewed and vigorous persecution of Christians earlier this year by destroying crosses, burning Bibles, confiscating religion materials, and closing churches.
The rest of the article can be found HERE.